Health Insurance Deductibles Skyrocketing in the Age of ObamaCare

The cost of health insurance deductibles is skyrocketing, and that is adding a serious financial burden to many Americans.

As deductibles have grown in recent years, a surprising percentage of people with private insurance, and especially those with lower and moderate incomes, simply do not have the resources to pay their deductibles and will either have to put off care or incur medical debt.

Here’s a chart from the Kaiser Family Foundation that illustrates this nicely. 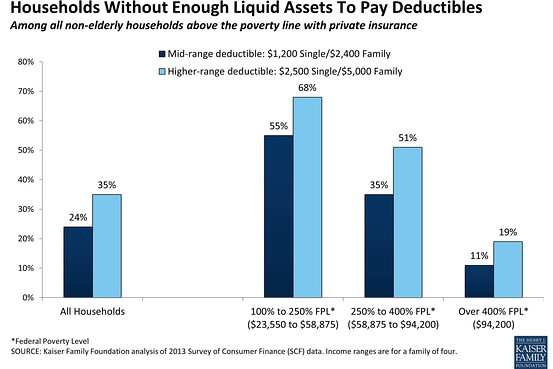 As you can see, 35 percent of families who have higher-deductible plans do not have enough liquid assets to cover those deductibles. That deductible could mean that a family has to spend $5,000 before having their insurance begin paying a significant amount of their health care costs.

For mid-range deductible plans, the numbers aren’t much better. Only 24 percent of American families in those plans do not have enough liquid assets to pay meet their deductible.

All those added health care costs need to compete with other common financial obligations like a family’s mortgage or rent, school costs, car and home repairs, food and clothing, and more. That’s a huge additional hit to a family’s budget. This leads many Americans to make hard choices about when to go see a doctor, if they should fill that expensive prescription, or if they should treat a chronic injury.

As Kaiser’s President and CEO Drew Altman wrote in the Wall Street Journal recently, high deductibles can be “a real barrier to needed care for people with moderate or lower incomes who are sick.”

President Obama and Democrats vilified high deductible plans during their sales pitch for ObamaCare, calling them “substandard” or “junk plans.”

Now, more people have to opt for these high deductible plans to lower their skyrocketing premiums, but it’s still not affordable insurance that helps.  This is exactly the case for our family.  Our deductible is now $6,000 per person, which is much less affordable than last year’s deductible of $1,200 per person.  The higher deductible, on top of higher premiums (which have doubled)  has put a significant dent in our savings and has caused me to delay a surgery.  We’re not in a lower income bracket either, so I’m certain others are suffering more.

In fact, a recent study highlighted in the Los Angeles Times, found that “employees’ insurance premiums and out-of pocket medical expenses shot up 21% from 2007 to 2013 to an average of $3,273 a year.”

Let’s not forget that one of President Obama’s chief promises when he was advocating for ObamaCare’s passage was that his plan would reduce premiums for a family of four by $2,500. Clearly that hasn’t happened. We detailed just yesterday, a study by the non-partisan National Bureau of Economic Research, stating that last year “premiums in the non-group market grew by 24.4% compared to what they would have been without Obamacare.”

So, while Americans are seeing their stagnating wages not go as far as they once did, they are now paying more for their insurance premiums and more for their deductibles – leaving many families struggling to cover the cost of their care.  What good is insurance if you can’t afford to use it?

We were told that ObamaCare was supposed to curb the out-of-pocket costs that Americans had to pay for their health care. Many American families, including mine, have a different story to tell.